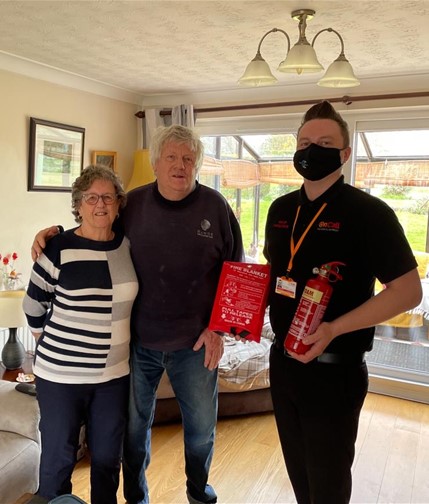 Pensioners Ted and Monika Claridge are thanking their lucky stars and their Rancom fire alarm after it alerted them to a chip pan blaze at their Oxfordshire home.

The couple, who are both in their 70s, needed hospital treatment after the incident at their Silver Street home in Tetsworth, which saw them flee as their kitchen filled with flames and thick, choking, black smoke.

Mr Claridge said today he was convinced they would have died had the smoke-detector not kicked in warning them of the blaze and alerting the fire brigade who came to the rescue.

This was today reinforced by Oxfordshire Fire Service who arrived within minutes of the alarm being activated – thanks to a call from Rancom’s monitoring centre.

Today Mr Claridge described how their peaceful Bank Holiday weekend had been shattered by the blaze which started as his wife cooked chips for their tea.

He said: “Monika had put the chip pan on while I popped to see a neighbour. She says she went upstairs to fetch something only to hear the phone ring and answered it in the bedroom.

“She ended up in a long conversation and completely forgot the pan full of oil was on the stove.

“I came back hearing all the commotion of the alarm and the house was literally full of smoke. I grabbed the burning pan and threw it out of the door. At that minute, the fire brigade arrived. We were both struggling to breathe and it was hard to see the smoke was so bad.”

Mr Claridge said he and his wife were overcome by the toxic fumes caused by the blaze and treated by firemen at the scene with oxygen. They were both taken to Stoke Mandeville Hospital in Aylesbury but released later that night after treatment for smoke inhalation.

The couple are now back home and grateful that the fire only caused superficial damage to their property.

“We only renewed our security and fire contract with Rancom Security six months ago and we are so glad we did, the alarm definitely saved us,” Mr Claridge added.

“We need a new kitchen and some decorating, but it could have been so much worse. The firemen said we were lucky our stove is electric as, had it been gas, it could have exploded and blown us sky-high!”

Oxfordshire Council Council’s Fire and Rescue Service launched a campaign, Fire Kills, last year to remind people of the importance of having a working smoke alarm.

The campaign urged residents to ensure their homes were protected and that any smoke alarms were regularly serviced and tested for low batteries.

Councillor Judith Heathcoat, the county council’s Cabinet member for Safety, said: “Fire safety should be a priority for every resident. Working alarms really do give those vital extra seconds’ warning needed to escape a fire.”

Lee Hosking, CEO of Sutton Coldfield-based Rancom Security, said: “Our fully-monitored fire and security systems really are life-savers. We are so pleased the alarm did its’ job in keeping Mr and Mrs Claridge are safe and their home spared too much serious damage.”

This website uses cookies to improve your experience. We'll assume you're ok with this, but you can opt-out if you wish.Accept Read More